[1]Ask Mother Millie is a question-answer based tumblr account that, while in its initial stages having been created just recently, seems to be focused on the poor parenting skills of a background pony known as Millie who, according to the MLP Wiki, made her appearance briefly as:

"The mother of the baby Rainbow Dash saved in The Mysterious Mare Do Well. Her cutie mark is three fans." - My Little Pony Wiki

According to her tumblr, Millie hasn't changed her ways one bit in putting her precious baby girl in danger. She hardly seems concerned with her welfare,and has been known to give her baby away without a moment's hesitation or a single care. If anything, she's thrilled. She also appears to have a rather frightening side to her when she runs out of patience for her foal.

This tumblr is known to feature several scenarios in which Millie mistreats her child or incorrectly uses parenting techniques.

What's To Be Expected In This Tumblr?

Another mildly amusing sidenote is that the creator of this tumblr page seems to refuse to correctly portray an OC's cutie mark. This may just be a single occurrence, but the first answer post blatantly misrepresented the character's cutie mark, as opposed to giving the pony their trademark thorned white rose the words "WORKS FOR MINIMUM WAGE" was stamped where her cutie mark had belonged.

If a continuing event, it may mean that Millie doesn't take OC characters seriously. Then again, she doesn't take her child's well-being seriously either so it's nothing to lose sleep over.

All responses thus far have been colored, clean-lined, and shaded usually answering questions one at a time. In some instances however they may be answered together in groups when the questions correlate with one another. In every response there is a comical pose and at least one panel of overexaggerated facial expressions or behaviors. 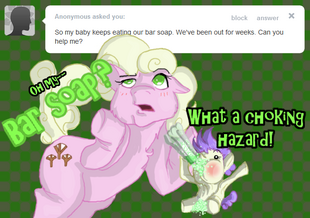 Mother Millie Says: Bars are for grown ups but bottles are for kids! 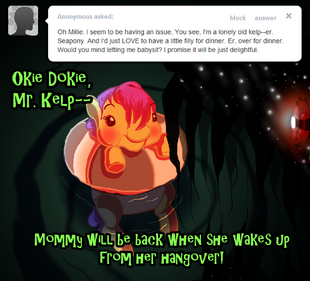 As Millie hands her baby off to yet another babysitter, she gives away that she may have a drinking problem. 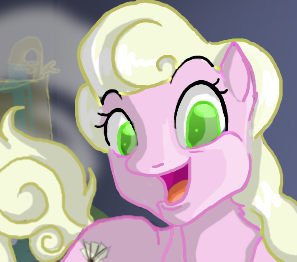 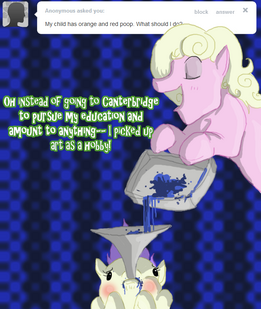 Mother Millie Says: A dash of blue will turn those bowels brown. 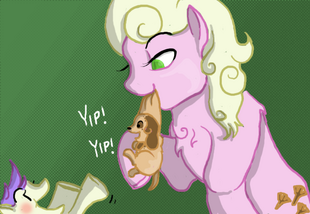 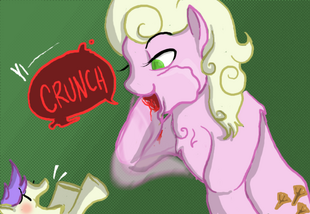 ... or not.
Add a photo to this gallery
Retrieved from "https://tumblrpony.fandom.com/wiki/Ask_Mother_Millie?oldid=20987"
Community content is available under CC-BY-SA unless otherwise noted.